Need your vehicle to go from beat up and dented into looking as good as new?

Well if you are, paintless dent removal (PDR) is often an effective alternative solution to help you return your vehicle back to its original condition.

Paintless débosselage (dent) removal, has quickly become one of the most effective repair alternatives for minor vehicle dents and damages.

Of course, not all damages can be fixed by using paintless dent removal, however, in many cases, PDR is going to be your best choice, instead of replacing an entire panel.

In the following article, we want to talk about how paintless dent removal works, as well as what type of dents and damages can be repaired by using it. 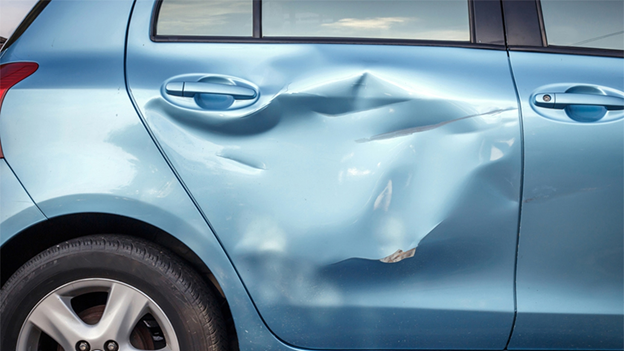 How Does PDR Works?

The most common method for a paintless dent removal, or débosselage sans peinture, involves having the repair technician use a streel rod to “push out” the dent from the underside of the panel.

Additionally, a variety of specially designed tabs, suction cups, and automotive glues may also sometimes used by the technician to repair the dent.

Before performing the repair, your technician will first examine the damage using a LED, fluorescent light, or reflective board. This will give him or her a better of the extent of the damage to help them determine how to proceed accordingly.

Once they’ve pushed the dent back into its original position, they will have to examine the area once again and fine tune the repair by tapping out any high or low spots that may be present.

Then, after a final examination, the surface of your vehicle will be back to its original finish.

What Type of Damages Can Be Repaired Using Paintless Dent Removal?

And when an accident does happy, it can cause any number of damages from minor dents and scratches, through to damages that are beyond repair.

Fortunately, PDR can be used to fix most minor dents and damages.

While PDR might not be able to repair your vehicle if you’ve rolled it or been involved in a head-on collision, any small dents should easily be repaired using paintless dent removal.

Below, are 3 of the most common applications for paintless dent removal or débosselage sans peinture. 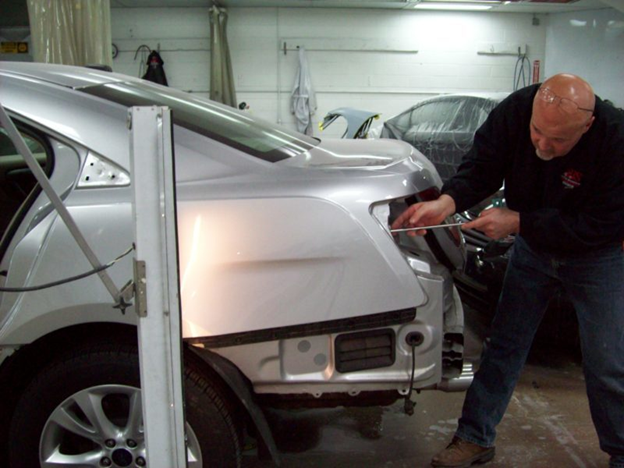 Maybe a hailstorm blew through your area while you were sleeping last night. You wake and your car is dimpled with dents and dings from last night’s golf ball sized hail. Your first thought might be that this is going to cost you a fortune.

After all, replacing dented vehicle panels can quickly become expensive, especially when you take your vehicle to just any old automotive body shop.

But fortunately, for minor dents and dings, paintless dent removal is often a suitable repair solution, which can save you from replacing entire sections of your vehicle.

When you’ve been involved in a minor vehicle collision, resulting in dents on your vehicle’s bumper or doors, PDR is often an effective repair method, even when the dents are a bit on the larger side.

PDR is a low-cost repair solution, and in some cases, fixing the dent doesn’t even require all that much work and can be completed within a couple of hours.

If you’re nearing the end of a lease period and will soon need to return your vehicle in its original condition, PDR can usually be used to repair any small dents or dings that the dealer would otherwise charge you for upon returning the vehicle.

With that said, paintless dent removal can even save you money by repairing your vehicle, without causing any damage to the original paint job.

Finally, it’s also good to understand that PDR cannot be used to fix all dents or vehicle damages.

This will be determined mostly by the size of the dent, as well as how badly the vehicle panel has been warped by the initial impact.

In general, smaller dents are much easier for technicians to fix with PDR. However, even larger dents can be repaired as long as the metal has not been too severely warped.

Green Gluing Technology and Concern of Robatech toward Nature

Gluing technology becomes important in many industries. Gluing processes can involve many devices and technologies so the industry can...

If you own a top-end vehicle from Porsche, Ferrari, Mercedes, Audi, or a similar brand, car repair can be a hassle. Why? The reason is...

Technical aspects you should know about your car

Owning a car is great; you will have freer movements and enjoy yourself as much as you want. However, running into mechanical issues is...

With the financial system still recovering from the recession, making earnings is the order of the day for a lot of enterprise...

What The In-Crowd Will not Tell You About Auto Mechanic

Small cars, mid sized cars and even SUVs can be a hybrid car. A hybrid merely implies that the normal technique of powering a...